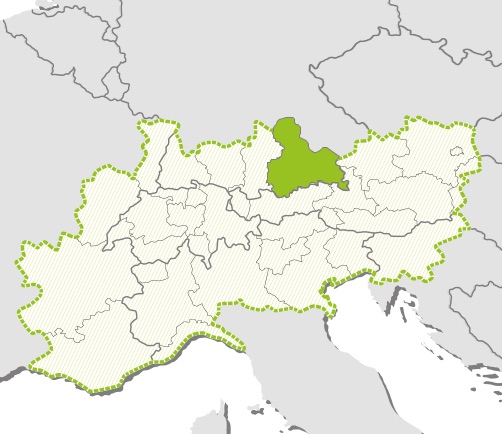 The Freestate of Bavaria, with a population of 12.5 million, is the largest federal german state and also one of the most dynamic regions inside the country. With a gross domestic product of EUR 549,19 billion in 2015 (Source: www.invest-in-bavaria) Bavaria, as an independent State would be ahead of 21 of the 28 EU member states. Its capital Munich is a major center of advanced technologies, finance, publishing, culture, innovation, education, business, and tourism in Germany and Europe. Since years, according to international city rankings, Munich is one of the top cities concerning standard and quality of living.
Bavaria has strong economic business relations with its neighbor States Austria, the Czech Republic and Switzerland and with some of the close regions of the Alpine Space like northern Italy.

The support contact points in Bavaria are the Chamber of Commerce and Industry for Munich and Upper Bavaria (IHK für München und Oberbayern) and the Italcam.

The Chamber of Commerce and Industry for Munich and Upper Bavaria offers services for its companies and represents the economy of the Upper Bavaria regions. Its offers are specially support services concerning Business Transfer / Company succession. Some of those services, like the e-platform Nextchange are offered thanks to the cooperation with other Partners.

Italcam is a no-profit association of private German law, recognized by the Italian Government and plays an active role in organizing business meetings, international trade fairs, seminars, conferences and round tables to promote knowledge sharing between the two countries.
Italcam doesn´t have a department specialized on company succession, but it has an Italian and German partner network of lawyers, business trustees, notaries, banks, insurance institute which could support the successors and transferors.
Thank to its transitional nature of the company Italcam could bring together successors and transferors on a transnational level, particularly within Bavaria, Baden-Württemberg and Northern Italy.

Our Services for transnational Business Transfer

The support contact points in Bavaria offers the following services: